This is my first post in my travel series.  I’m going to start it up with the first trip I took this year.  This past April/May, James and I traveled to Las Vegas, Nevada. AKA: James’ home town.  I know you’re all thinking, “Why in the world would someone move from Las Vegas to Indiana?”  I wondered the same thing too, but that’s a story for a different time.

Our time at the airport was quite the event.  My Dad dropped us off at the airport about two hours before our flight.  We had already checked in online, so we went straight to security.  Security was quick and painless (thank the Lord).  We decided to have lunch after we got through security.  We decided to eat at Wolfgang Puck.  This is where things started to go downhill.  I’m pretty sure we waited 15+ minutes to even be greeted. Then we waited another ten minutes to put in our drink order.  The food was good, but the service was not.

After we ate, we still had some time (surprisingly), so we decided to get some Starbucks.  I asked the barista for an iced coffee with milk, and they gave me an iced coffee with no milk.  It really wasn’t a big deal, it was just annoying after dealing with the restaurant’s service.

We headed to our gate and found a spot to sit and relax.  I took out my MacBook to do some budgeting, and James was watching videos.  Then, my idiotic self KNOCKED OVER MY COFFEE.  The lid popped off and made a huge mess.  I was LIVID.  I had to make two trips to and from the bathroom to get paper towels, my hands were all sticky from cleaning up the coffee mess, and I now had nothing to drink.  I would’ve just gone back to Starbucks to get another coffee, but 1) it was at the complete opposite side of the terminal, 2) I was not about to wait in that line again, and 3) it was almost time to board.  There was this sweet couple sitting across from us that sympathized with me crying over spilt coffee, but I think they found it funny (I would’ve too if it hadn’t happened to me).

James and I flew Allegiant roundtrip from the Indianapolis International Airport to McCarran International Airport.  Some people might snub Allegiant, but I don’t.  They’re affordable, and I’m on a budget.  My only complaint is the seating is not very roomy, but for a flight that only lasts a few hours, it’s not a big deal. We finally boarded and had a smooth takeoff.

Once in the air, the flight attendants offered snacks and drinks.  I decided to try a whiskey and coke: bad idea.  Jack Daniels whiskey is the foulest thing I have ever tasted.  It was so gross, I was gagging trying to drink it. I finally convinced James to drink the rest of it.  He thought it was delicious???

Something else less-than-pleasant happened.  We had been circling in the air for a little bit towards the end of our flight.  The pilot came on th4e overhead speaker and told us there were thunderstorms in Vegas, and we would be flying an hour back to Phoenix, AZ to refuel and wait the storm out.  SO we flew an hour back, sat at a rinky-dink airport for another hour, then flew an hour back to Vegas.  Luckily, the weather had cleared up, so we were able to land. (Also, what are the odds of it thunder storming in the desert when we were supposed to land???)

Once we landed we headed to the ride-share part of the parking garage.  That place was a holy nightmare.  There were people standing in the walkways, luggage being thrown about recklessly, and traffic was horrendous.  We eventually made it to our Uber, and after a short drive we arrived at our hotel: The Stratosphere.

We waited in line for a little bit, and then checked in by a cute and very nice girl.  She offered us a room upgrade, but being the budgeting freak I am, we declined.

Our room was basic, but nice.  The bathroom was big with a massive wall-to-wall mirror, and we had a king size bed.  There was also a TV and table with chairs.  Our view left much to be desired.  It was a lovely view of the roof of the casino and the parking garage attached to the hotel, but that’s what you get when you pay for the cheapest room.

Much to my surprise I woke up at 4:00am the next morning.  I was so mad, but I was wide awake (stupid time change).  My sister was watching Dally, so she would FaceTime me every morning while she was at my house.  Each morning we would typically go to the Starbucks downstairs in the casino, then gamble for a little bit.

Funny story:  James and I actually won money at the casino. We had set a budget that each of us gets $50 to gamble with.  After that money was gone, we were done gambling for the trip.  We ended up finding a Deal or No Deal game that was SO much fun. We ended up getting lucky a few times and winning money.  Once we got up to a certain amount of winnings, we decided to not get lower than that, if we did, we would quite for the day.  By the end of the trip, we had actually profited a couple hundred dollars, so that was really cool.

We hung out with some of James’ friends a couple times.  I actually discovered that I love sushi when we went out with his childhood best friend. Another thing we did was go to the Las Vegas North Premium Outlets.  I received my first paycheck on the second day of our trip.  With that paycheck I got a decent advancement to buy work clothes. Well, this mall had an Express Outlet, and I went ham.  And since we had won some money, I was able to get a couple new bags, and James got a new pair of shoes and some shirts.  We (I) ended up purchasing so much stuff, we actually had to buy a second suitcase (oops).  While at the mall, I also discovered that Taro Tea with boba is amazing. 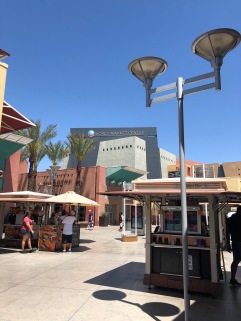 On the last full day of our trip, we said goodbye to James’ family.  James’ grandma cried again (poor lady).  We all went outside, and while James’ back was to his grandma, she looked at me and held up her left hand, pointing at her ring finger.  James got all defensive when I said, “Believe me, I’m trying!”  His grandma was like, “don’t worry, I’ll make him.”  His mom said, “Well James, it’s not every day you find a girl you like.” It was SO funny.

The next morning we gathered all of our things, and checked out at the front desk.  Our flight wasn’t until later in the day, so we left our luggage at the desk.  We gambled one last time at the Deal or No Deal machine, and played a few slots.  We actually ended up winning a little more money! We decided to quit while we were ahead, and decided we might as well head to the airport and hang out there.

We got to the airport ridiculously early, and the place was PACKED.  We made it through security, and while we were walking to the gate, our brand-new duffel bag’s strap broke.  James was not happy, since he was the one having to carry it.  We ate philly cheesesteaks after waiting in line for what seemed like forever.  We wanted to charge our devices, so we needed a place to sit near a couple outlets.  Funny thing is, McCarran apparently doesn’t have outlets by any seats.  The have a few bar height tables with outlets.  So, James and I had to stand awkwardly while we charged everything.

While we were waiting, I received a text that our flight had been delayed about an hour.  Okay, no big deal.  Then, maybe 45 minutes after that, our flight got delayed another two hours or so. So basically, we spent ALL DAY at the airport.  We got there early because we didn’t have an anything better to do, and then it got delayed 3-4 hours.  I think we were there for over four hours.

We finally got home, and my dad picked us up.  We ended up unpacking everything once we got home, even though it was like midnight (thank you time change).  We were SO HAPPY to see Dally.  Although, he didn’t seem to care all that much.  Whatever.

That was our trip! Our first vacation was so much fun. I can’t wait to go back to the west coast and enjoy the dry heat.  I also can’t wait to see James’ family again.

Did you guys go anywhere this past spring?  Tell me about it!